I was reading my emails today when I saw the Daily Prompt Snapshot Stories. Snapshot Stories:
Open the first photo album you can find – real or virtual, your call – and stop at the first picture of yourself you see there. Tell us the story of that photo.

The first thing that came to my mind was my Flickr account. Flickr is my personal photo vault. Flickr helped me stopped worrying about losing those precious memories. I do not trust an external hard drive. I already lost hundreds of photos because the hard drive failed and the files were unrestorable. I even scanned our old photo albums and save the scanned copies to my Flickr account, making sure that I can get access to them anywhere. Anyway, I did not pick the first photo that I saw. Instead, I searched the The Memoir of My Childhood Flickr Album and chose this scanned page of our old album. 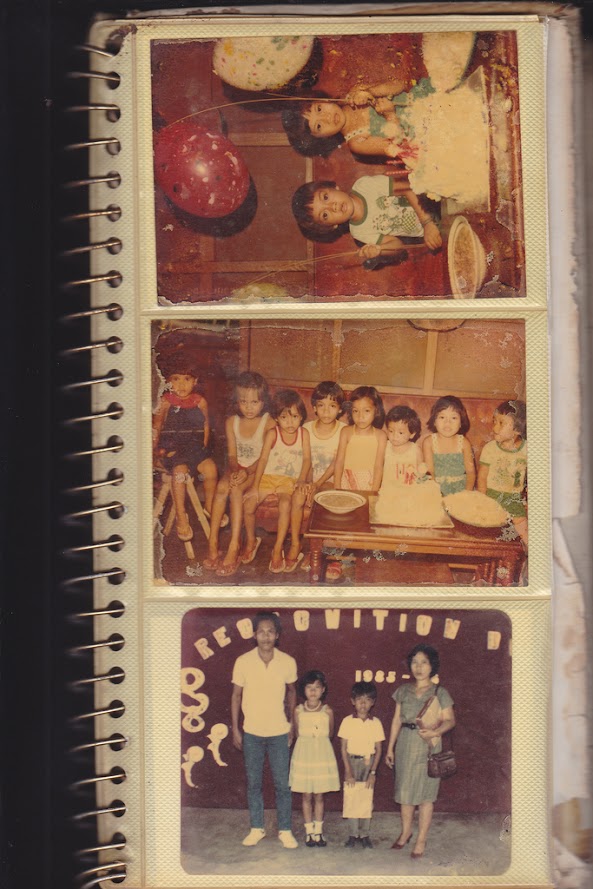 So here it is. I still have THE album, a  30-year old album keeping my precious childhood memories. On the first two photos, we were having a birthday party. I forgot if it was for my 5th year and 4th year for my brother. My brother and I celebrated our birthdays together. It was more practical, financially speaking. No, we’re not twins. I was born October 14 in 1976 then a few months after my mom got pregnant. My brother came out to this world the day before my first birthday, October 13. Right timing! We invited our neighbors’ kids. I cannot remember their names anymore because I lost contact with them when we moved to a new house, I was like 6 years  or 7 years old.  We had balloons and… Toothless! LOL!

My parents used an old film camera to capture the unforgettable moments of our cutest days. Every picture taken by the camera should be perfect, no room for blinking or any movements. Cameras back then used film and the cheapest was a 12-shot film. You cannot just delete and retake the photo if you didn’t like the result, there’s no option to preview a photo after each shot as well. It was a simple celebration with just 3 kinds of food served. The Cake. For us, it was the most important and the best part of the celebration. During those times, with my mom and dad earnings of below minimum wage, having a cake for our birthday party was a luxury.

The third photo was a Recognition day. We were recognized by our school that we had completed a school year with good grades and flying colors. This was on my 2nd grade and my brother on his 1st grade. My parents were so proud of us. We would always look forward to those days because our parents had gifts for us, for being a good student, a good son and good daughter, for making them happy.

We were happy with the simple life we had. I’m not saying that I am now living an extravagant life… It’s just that life was so simple – no computers, no internet, no mobile phones – what we had were  analog television and analog radio. The surroundings were so peaceful and what you will hear were just laughter and cheers of children playing Filipino traditional games at sunset.  I miss those days!

2 thoughts on “The Memoir of My Childhood”